In today’s gospel, we visit the calling of the first disciples and among those was Andrew. Today, we celebrate and honor Saint Andrew for his love and dedication to the Lord.

Many times, we may feel inadequate in the things that we feel the Lord is calling us to do. Yet we must remember that when Jesus called those first disciples, He was not looking in anywhere specific. Jesus called His first disciples while walking along the beach. He was looking for those who would hear His voice and listen.

Although Peter and Andrew may not have fully understood the situation, I admire and love their utter spontaneity to follow Him without a moment’s hesitation. To leave everything and everyone they knew behind, Saint Andrew and the other apostles are excellent examples of surrendering the things of this world to follow our Heavenly Father...may we all be blessed with the same type of courage in our own lives.

Are we as eager to drop our “nets” – a deadline at work, checking email, a trip to the gym, daily commute – when someone who needs the “good news” calls upon us today?

reflected by Tam Lontok
Posted by Tri Dinh at 3:00 AM No comments:

A common desire to be real 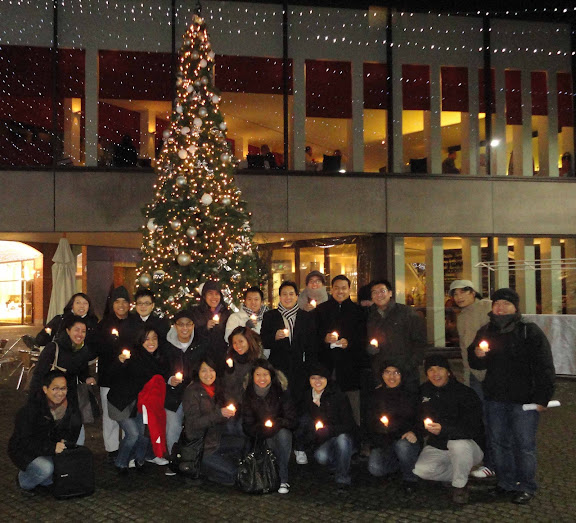 I am one of those people blessed to visit many places, people, and communities. Among the many blessings I’ve received throughout such travels, two stands out. The first is a heartfelt knowing that God is everywhere, laboring, loving, transforming. People say that God is omnipresent. My encounters with many people in many places confirm this truth. It is breathtaking to know this in a deep deep way. The second grace I am receiving is also a heartfelt knowing. It is the tangible realization of how transformed people can be when they live out their common desire to be real. Let me elaborate.

My Thanksgiving was spent with a group of young adults (24-35 years-old), mostly from the Parish of Queen of Peace in München (Munich), Germany but also from the nearby cities of Stuttgart, Mannheim, Regensburg. We experienced three full days of leadership workshops and prayer. Throughout the weekend we tried to live fully the present moment, create space for one another to be real, and especially to listen to our inner voice – God’s voice. I have had the opportunity to experience this kind of Cura Personalis event many times in the US and Canada with people from varying age groups and different ethnic backgrounds. Yet, I have never been given such firsthand experience with young people in Europe, where it is generally known that faith is passé and irrelevant among the young. Moreover, in the Catholic context, the sexual abuse scandals have left behind reactions of doubts, sadness, anger, and disillusionment.

The group took significant risks and sacrifices. Without knowing much about the gathering, these young adults took time off from work and studies to dive into something truly different. Although many have been on retreats and youth gatherings, few have had the opportunity to slow down, reflect, and listen to their inner workings. Even though many have known each other for five years or more, not many have had the occasion to be open and vulnerable in such real and honest ways. Real in terms of embracing their doubts, weaknesses, pains, confusing questions that often accompany quarterlife crises among young adults. Yet, they courageously created a safe space for one another to take risks, to actualize their common desire to be real, to grow spiritually and with each other. The results are astounding.

Even though the fruits of the gathering remain to be seen in the lives of participants in the coming months, signs of transformation are already evident. The pastor and parish leadership have commented how the young adults have noticeably and positively been changed in their body language, attitude, and spirit. At an outing after the weekend, the young adults themselves shared these observations: “We have never related to one another like this … in such open, honest, real ways … it’s so amazing, beyond what we can imagine … we have been transformed.” I wish I have the language to adequately describe the glow of spirit revealed through their glistening eyes, beaming faces, and grateful looks. It is as if they are stumbling on a “treasure buried in a field,” and are considering to sell all that they have to buy that entire field (Mt 13:44). It is simply indescribable.

I have been blessed to see such joyful discoveries and burgeoning growth in people before. Yet, I see clearly in the past few years the potentially transforming power of people willing to take risks in living out their common desire to be real, to create space so they can be more truly, humbly, and fully themselves. It allows me a greater glimpse into another layer of Jesus’ parable of the sower (Mk 4:1-9; Mt 13:1-31). It is very possible for us to become, together, the rich soil which receives the Word, accepting it, and bearing fruit “thirty and sixty and a hundredfold” (Mk 4:8). When we dare to live out our common desire to be real, miracles can happen. Genuine growth happens. God happens.

Dankeschön! Thank you my friends from Germany … for such a tangible, palpable gift that touches me profoundly and unfolds something deeper within … an unforgettable Thanksgiving … an inspiring Advent gift!

With whom can you be real? With whom are you willing to create space to take risks? Will you bring it up with God and listen?
Posted by Tri Dinh at 12:51 AM No comments:

Monday of the First Week of Advent: Worthy… or not worthy?

When I attend Mass, the most personal and sacred moment is right before Communion. It’s when the Priest raises the Host and the Chalice and proclaims, “This is the Lamb of God who takes away the sins of the world. Happy are those who are called to his supper“, and we respond, “Lord, I am not worthy to receive you, but only say a word and I shall be healed.”

Recently, as I’ve learned of this prayer’s origin, I found it interesting that it was first spoken by a centurion in Capernaum when he approached and appealed to Jesus, “Lord, I am not worthy to have you enter under my roof; only say the word and my servant will be healed.” (Mt 8:5-11) He must be a really compassionate person to care so much for the well-being of others – a resemblance of Mother Teresa?

For me, this compelling prayer always strikes strong emotions. Placing my right hand over my heart, often I hear my own voice tremble, while my eyes get teary and my mind flows through a last-moment reflection… For a while there used to be feelings of guilt and despair, seldom positive and exhilarating thoughts…
These days it’s God’s Grace that “break open the word” for me to understand better, and I’m forever grateful. I now believe that this prayer reminds me to be humble and to trust that our Lord is gracious, merciful and forgiving. Our Lord does not judge how “worthy” I am, or keep score of how many times I do foolish things to show that I am not! Through and through, His word alone has the power to heal me and lead me out of darkness. The “Word” is that of Jesus calling me softly and tenderly to come to him; to come home; to stop being weary, afraid, ashamed.

It’s really up to us to listen. Are we letting the Word of Jesus bless us with dignity and honor, give us the strength to be faithful and walk in His way?

anonymous
Posted by Tri Dinh at 3:00 AM No comments:

Today marks the first day of the season of Advent where we are reminded of the need to be watchful for God’s presence. We do not know of the exact time when God will come again, let alone when our last hour on earth will be yet the busy nature of our lives easily tempts us to be preoccupied with the worries of the future instead of living the present moment to the fullest.

God is reaching out to us in every interaction, whether it be through a heart to heart talk with a close friend or a smile from a passing stranger. I find myself easily dismissing these simple events by not being consciously aware of God’s presence. By receiving God’s love through our friends or strangers, we are able to give back that love to others and acknowledge God is everywhere. It is this receiving and giving of love that will prepare us for God’s coming and give us the confidence we have a big, merciful God when our last hour does arrive.

Lord, we marvel at the awesomeness and mystery of your omnipresence. May you open up all of our senses to allow us to receive and give your love so that we may be prepared for your coming and when we meet you face to face at the gates of heaven.

Where do you see God now in this very moment and in your next interaction with a friend, relative, or stranger?

reflected by Greg Lontok
Posted by Tri Dinh at 4:16 PM No comments:

Being surprised by grace...

How are you living? With open hands or with clenched fists? In the present, hanging on to the past, or worrying about the future? At every moment - at this present moment - we are surprised by grace through whatever we are experiencing, positive or negative, “good” or “bad”. We are invited to live fully each moment as a response to love. Honestly, I am still learning … catching glimpses …

God is present and laboring through every moment of our lives, loving and inviting us to greater gratitude and freedom. Each moment is a blessing, albeit obvious or disguised, for it can reveal and lead us closer to divine love. Thus, each moment is potentially grace – a personal gift from God, drawing us deeper into the river of grace that flows through each of our lives.

A help to slow down & focus on God